You are here: Home / MTHFR Life / How to Help Your Kids Get Through a Blood Draw

Disclaimer: I am not a doctor, medical professional, health professional, or any type of medical or other expert. The information on this blog is not advice. Always seek the advice of your physician or other qualified health professional with any questions you may have regarding any medical condition or before undertaking any treatment. The content on this blog is for informational and educational purposes only. Any use thereof is at your sole risk and discretion. Read the full disclaimer. 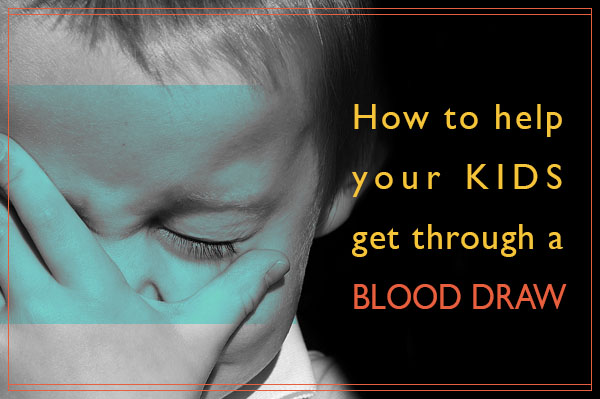 Who’s jumping up and down to get a needle in their arms?

Yeah, I didn’t think so. We know blood draws are a necessary evil, but the littles will not be so easily convinced. We recently had to have a blood draw to test for lead, and I’m going to share some tips that worked to get us to the other side with no tears. Seriously! Think a no tears needle experience is impossible? Read on!

How to Help Your Kids Get Through a Blood Draw

Talk to Your Kids About It

I keep things super basic when talking to toddlers since they often don’t have a large vocabulary. For the routine one year-old blood draw, here’s what I said: “You have to get a shot, a little ‘owie’. Mama will be with you and hold you, and after you can have ‘milkies'” (our term for breastfeeding).

I also used a stuffy to play out what would happen to them. I figured a visual aid could help them understand better at that age.

“The doctor will put the shot in your arm like this…” using my finger as the ‘shot’, “… then all done!” I intentionally used the word doctor because by this age my kids had a good grasp of that word, and there was no way I was introducing the word “phlebotomist” to them.

Now that my kids are 6 and almost 3, I like to explain more about what will happen and why. “Mommy is going to hold you. The doctor is going to put the needle in your arm and take out the blood to test it. It’s going to pinch and hurt, but only for a minute, and you can watch iPad while they take the blood.” The promise of screen time got them very excited.

Over the next week, I mentioned it again casually, “Remember, guys, in a few days we’re getting the blood draw” and another casual reminder the day before the appointment. The two year-old said, “It’s going to hurt and we will watch iPad.” “That’s right!” I responded, “And it will be over so fast and Mommy will give you cuddles.”

The day of our appointment, we arrived an hour earlier than our appointment time because I wanted to see if we could get in sooner. The kids needed to get to school and I needed to get to work, but we walked in and the place was wall to wall people. Fail! Luckily, I was prepared with distractions and the hour in the waiting room went by quickly and without much fuss. I didn’t want to pull out the iPad and Kindle for them until they were actually getting their blood drawn since that was going to be the main event of the day. Here are the things I packed that we rotated through during our wait time:

One other note for appointment day: make sure your kids are hydrated so the blood comes out more easily/quickly.

Never underestimate the power of a stuffy.

Back to my son’s first blood draw. We brought along his favorite stuffy at the time (Elmo) to bring him some comfort. I also had a master plan that, thankfully, the phlebotomist was totally cool with and I’m forever grateful. I asked her on the spot if Elmo could have his ‘blood drawn’ first and without missing a beat, she played right along. My son was completely entranced, and his blood draw was smooth sailing after that. Comfort items count for a lot, so whether it’s a stuffy, a blankie, a pillow… have it nearby for before and right after the blood draw.

Our latest appointment was a first for us because I had two kids with me at one time. My son is highly sensitive so I felt that of the two, he might have a stronger reaction to the blood draw and need more comforting from me afterward. I decided to have the two year-old go first.

I sat her in my lap, her right arm is where the most accessible vein appeared to be so the phlebotomist began prepping. We set up the iPad on the left side of us and started playing a show. I explained to her that first he was going to clean her skin and then put the needled in. “Just watch the show,” I said. Unfortunately, she was more interested in what was about to happen to her. Then she started saying that she didn’t want the needle and became upset. She whimpered and shook her body as if crying, but no tears. I told her it was going to be okay as the needle went into her arm. Once it was in, she relaxed quite a bit. I told her it was almost done and pretty soon it was. She was very smiley after and eager to return to the iPad.

My son was up next and he came over to the chair boasting that he didn’t need to sit in my lap. He was going to do it all by himself! I praised and encouraged him, and truly I was proud of him, but my mama’s intuition sensed that once the needle was closing in on his arm, he might feel less courageous. I was right. His body tensed up and I immediately spoke his name sharply to get his attention. I asked him how many fingers I was holding up and he answered. Then I asked him again, and again, and again until he was all done. I praised him and we high-fived and packed it up.

After Your Kids’ Blood Draw

After the appointment I pulled out a special treat — a packet of Annie’s Gummy Bunnies for them to share. I actually let them know before the appointment that I’d brought them so they had something else to look forward to after.

On the car ride home, while they were happily eating gummies, I praised them and relayed back to them what happened to help with their processing. I simply stated what had happened: You guys did so great, you were so brave! You had to have a blood test, the needle in your arm hurt for a minute, and then it felt better. The 2 year-old chimed in reminding me that then they got gummy bunnies.

Mission accomplished! Hopefully, this gives you some ideas of how to navigate through a pretty stressful experience. We know that blood tests are needed, but with a bit of prep, some of the fear and stress can be reduced.