Disclaimer: I am not a doctor, medical professional, health professional, or any type of medical or other expert. The information on this blog is not advice. Always seek the advice of your physician or other qualified health professional with any questions you may have regarding any medical condition or before undertaking any treatment. The content on this blog is for informational and educational purposes only. Any use thereof is at your sole risk and discretion. Read the full disclaimer. 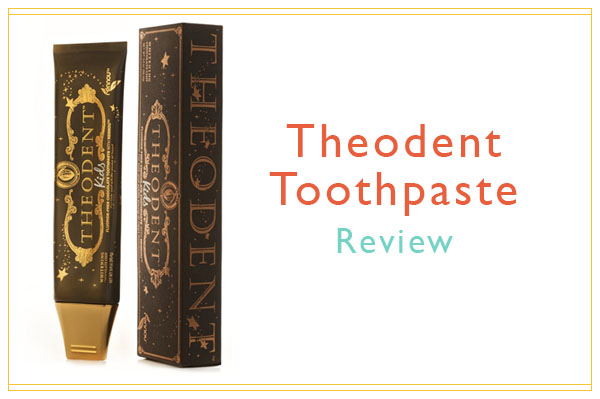 I want to start off by saying that I was not paid or compensated in any way for this review. (I wish I had been though, because Theodent is pricy, and I would have loved even one free tube of it. Hear me, Theodent reps? Any time you want to send a free tube over, go right ahead!)

I can’t recall where I first heard about Theodent toothpaste. I was searching for a new toothpaste for my kids because I was looking for an alternative to both non-flouride and flouride kids’ toothpastes. When I read about Theodent, it seemed like the perfect solution. I explored Theodent’s website to learn about the product and then read some Amazon reviews. I read a few reviews indicating that the regular version (Theodent Classic) had a mild mint taste, and reviewers’ kids were tolerating it well. But the kids’ version of Theodent, Theodent Kids, tastes like chocolate. Chocolate, people! (Sorry… do some people not get excited by chocolate?)

After some deliberation (checking my available budget for the rest of the month), I decided to buy one tube of Theodent Classic. I was hoping that the mint taste would truly be as mild as the Amazon reviews stated so we could finally be a one toothpaste household. (Spoiler Alert: It wasn’t. My kids eventually complained about the mint taste even though I totally agree it’s very mild.)

Theodent’s ‘secret sauce’ is something called “Rennou™”. According to the manufacturer’s website Rennou™ is “a non-toxic proprietary blend of a naturally-occurring extract found in chocolate blended with other minerals that help to strengthen the enamel surface of human teeth.”

That “naturally-occurring extract” from chocolate is theobromine, which is found in the cacao tree and it’s what gives chocolate its bitter taste. It has shown promising in dental care as an alternative to fluoride (which can be toxic if swallowed). One study concluded that theobromine gave “remarkable protection” to enamel. Another study specifically on Theodent toothpaste showed it repaired and restored (re-mineralized) enamel more effectively than fluoride toothpastes. (This particular study was funded by a research grant from Theodent, take that as you will. It was a double blind trial, which is good, but I’d be remiss not to mention it.)

Okay, first… my teeth were whiter within two days. I wish I’d taken a ‘before’ picture. I have been through traditional whitening toothpastes, baking soda concoctions and activated charcoal (don’t get me started on how uncontainable that mess can be) in an effort to whiten my teeth. None of it worked. I was not at all expecting to see a difference in the color of my teeth, but I totally did and I was really pleasantly surprised by it. I was sold.

And then, my son dropped the whiny bomb. “It’s too miiinty, I want the orange mango toothpaste.” I figured he just needed another day or so to adapt. Unfortunately, he mentioned it again the next day and then my daughter mentioned it. Rather than have a teeth brushing mutiny, I placed an order for Theodent Kids. I mean, I guess I wasn’t totally crushed since we were about to have another source of chocolate flavor in our house, but I was dubious. Maybe the chocolate was some weirdo, fake tasting thing they weren’t going to like either.

A couple days later when the new Theodent Kids tube arrived at our house, I ripped the package open immediately. (And for the record, I’m kind of a slave to packaging and these products have the goods — they are gorgeously designed.) I went straight for my toothbrush and applied some Theodent Kids. Wow! It has a very nice, mild chocolatey taste. When it was time to brush my kids’ teeth, I went in with confidence. They both loved it — gorgeous smiles all around. We’ve been using it for over two months now.

If you read any of the Amazon reviews you will see much commentary on the tube’s cap. It reminds me of a flattened pyramid, and when trying to take it off when wet (or with wet hands), it’s actually impossible. I mean I’ve tried and tried and I just can’t get it off; very odd phenomenon. Some people gave up on the product for that reason. I personally don’t let it bug me since I generally have a towel nearby to dry up.

I’m not sure why they couldn’t redesign the cap with that same shape and just add a hinge near the top to make it a flip-top. Hmm… maybe I need to call them and make this suggestion. Maybe they will give me a lifetime supply of Theodent!

Why it Matters to MTHFR Kids

Fluoride can be toxic even in small doses for any person. MTHFR mutations inhibit the ability to remove toxins from the body. I try to avoid as many toxins for our family as I can.

Our family is hooked on Theodent toothpastes. I like that there is a non-toxic, active ingredient which has shown to effectively re-mineralize teeth.

Resources
Is Chocolate Better for Your Teeth than Flouride?
Effect of theobromine-containing toothpaste on dentin tubule occlusion in situ
Evaluation of human enamel surfaces treated with theobromine: a pilot study
Impact of Fluoride on Neurological Development in Children